Enter your City name or Pincode

It is said that Alexander Cunningham had come to this town around 1873-74 and described its antiquities. According to him, Kharod derives its name from Khara and Dushana. These were the two demons of Ramayana period. These two demons are also supposed to be the brothers of Ravana and used to live with three other three brothers in this region. According to this legend, Turturia, where Jaba (one of the brothers) stayed a war between Rama and Khara-Dushana took place. This has been marked with a bat tree as per local traditions.

There is another legend that states that these temples at Kharod were made by king Ashwa Dhwaj, the brother of king Tamra Dhwaj of Ratanpur. However, according to some of the inscriptions at Kharod, its antiquity goes back to the times of the Panduvamshis of Kosala, seventh century CE. The inscription refers to Isanadeva, who was an early Panduvamshi king. Hence it is possible that the town was made under before Tivaradeva conquered Sripura (modern Sirpur) from the successors of the Sarabhapuriyas.


Places to see in Kharod 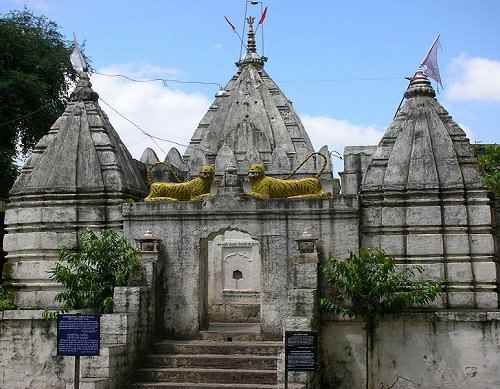 Even though it is a small town, Kharod does offer a lot of sightseeing and historical monuments. Here are some of them-

Lakhneshvar Temple continues to be one of the oldest temples in the area where inscription of King Isanadeva of Panduvamshi dynasty is there. It is believed that the temple was made around the same time. There are also some inscription here, which date back to Kalchuri king Ratnadeva III. Lord Shiva is worshipped in this temple in the lingam form.

Another old temple, which is a popular tourist spot in Kharod is the Shavari Temple. Over the years, this temple has undergone many renovations and it still has some of the ancient states preserved. The goddess worshipped here is known as Shavari Mata and the temple is decoratively done up.

Andaldeo Temple is another popular spot for the tourists and the locals too. It statues of many river goddesses, which include the likes of the Ganga and Yamuna at the entrance, while on the inside are lord Shiva, Brahma and Vishnu.

Kharod can be reached by 60 kms Journey from Bilaspur. You can reach Kharod by air from Raipur Airport. It is about 155 Kms NE from Raipur by car.

There is no doubt that emergencies, especially medical ones can strike at any point of time. Here are some of the hospitals in Kharod:

Being comfortable is very important and thus there are plenty of lodges and guest houses around and in the town of Kharod. Some of these are-

Comments / Discussion Board - About Kharod